Brownsville is Waging its Own Fight Against COVID-19 and Racism 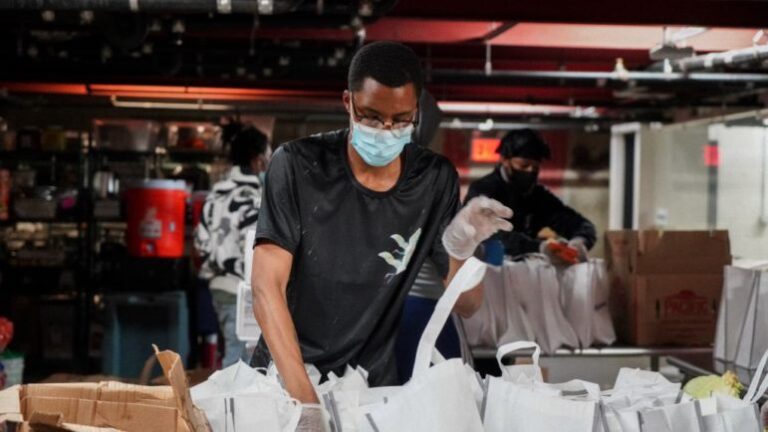 Originally published by Erasma Beras-Monticciolo on City Limits on June 19, 2020.

In Brownsville, Brooklyn we have struggled to find the words to express how we felt as we watched the video of George Floyd’s brutal murder at the hands of police in Minnesota. Ninety-nine percent of Brownsville’s population identifies as people of color, and although we may be geographically distant from Minneapolis, our hearts and minds are aligned.

We deeply felt the pain of Floyd’s death. Many of us are overwhelmed with grief and anger, while others are numb from years of losing family and friends to police brutality or to mass incarceration—a result of the decades-long war on drugs. As we pass each other in masks on the streets of a COVID-19 ravaged community, we nod to each other, honoring our shared pain and acknowledging what has too often been the norm across the United States: anti-Black racism.

We have watched with feigned bewilderment as state officials asked themselves on national television “why do the poorest pay the highest price?” To our community, the answer was simple: systemic racism. It stares at us in the face every day in Brownsville, where decades of disinvestment has manifested itself in income inequality, deficits in the education system, a class structure that isolates our community and what Marian Wright Edelman described in her 2009 essay for the Children’s Defend Fund “the cradle to prison pipeline: America’s new apartheid”.

Anti-Black racism isn’t just embedded in law enforcement, it is part of a larger system that was intentionally designed to serve the interests of those in power to the exclusion, exploitation and oppression of those outside of White America’s access and influence. We have seen this directly play out within the context of COVID-19, where our community has been disproportionately impacted. While we managed to lower infections (from 54 percent), we are still trying to break the overindexing 41 percent infection rate (while the rest of the city is at 19.9 percent). COVID-19 didn’t create the inequities that hastened the spread of infection, but it did exacerbate them, further underscoring how Black Americans have historically been dehumanized.

As a result of the new apartheid, adults from Brownsville are three times more likely to be incarcerated than other adults in the New York City. This is even more evident in the treatment our community has received from law enforcement during the pandemic. As we grappled with COVID-19, police officers brutally enforced social-distancing rules across Black and Brown communities (while turning a blind eye in White communities).

An example of the racist policing of social distancing rules unfolded in May, when police officers were recorded throwing Donni Wright to the ground, punching him and then arresting him for not practicing social distancing rules. According to Donni’s lawyer, Donni suffered a bruised chest and wrist, lumbar disc derangement and a possible fractured rib.

However, near Christopher Street in Manhattan, where groups of White people gathered to socialize, police officers could be seen, in stark contrast, simply handing out masks. Of the 40 arrests made in Brooklyn for breaking social distancing rules, one was white, four were Latino and 35 were Black, and a third of those arrests were made in Brownsville. This type of abuse, control, inhumane disregard for Black bodies and societal isolation is not new for us and we’re tired of it.

That is why, as a community, we are not taking a knee waiting on the government to provide solutions. We are exercising our power and local resources to develop the hands-on solutions and practices that will most benefit our community.

Eleven weeks ago the Community Board 16 created a COVID-19 committee, which brings together a wide range of community individuals, organizations and local agencies to develop and lead a community-wide response to the pandemic. As a collective we filled in the gaps to which the state and city government had been slow to respond. We:

• tackled misinformation and developed tailored messaging around health and safety that resonated with our community;

• created a coordinated response in which community residents are able to receive grocery deliveries as well as other essentials, thereby minimizing their exposure to infection;

• increased awareness of community programs and resources and directly connected residents to those services;

• petitioned for testing sites within our community and widely disseminated information so that residents could get tested;
Advocated for access to free masks for all of our community residents;

• established our own mechanism in which families in need are able to receive technology access to support their health as well as their children’s remote learning, given the NYC Department of Education’s slow response.

As a result of these efforts, we have been able to protect our community from further infections and believe that it’s this same coordinated approach that we must take to address the perpetual pandemic of police brutality in our community. We took such action following the recent incident with Vincent D’Andraia an officer based at the 73rd precinct in Brownsville, Brooklyn who knocked a protester to the ground leading her to suffer a concussion and seizures.

With support from the stakeholder groups and a groundswell of voices from the community, local elected called for the immediate suspension and advocated for an investigation. D’Andraia has been charged with assault. The local elected officials also pushed for Inspector Edelman, also of the 73rd precinct, who witnessed the incident but didn’t reprimand his officer or aid the civilian, to be transferred.

We have seen what we can accomplish through collective action, and we are not stopping until our community is able to review and inform policies related to NYPD’s use of deadly force, physical force and other policies that unjustifiably target the most vulnerable. We will also push to develop mechanisms in which we can hold law enforcement publicly accountable for their actions, but beyond that, all of our leaders as well. We know that our work can’t stop there and will therefore continue to tap into our own community assets–our people–to effect sustainable change in Brownsville.

One thing is certain: we are determined to live up to the Brownsville motto “Never Ran, Never Will”. We are all nodding in unison now!